Earlier today, Kanye West tweeted something of an abridged version of his career. All right maybe I’m exaggerating a little, but he did tweet a lot about the past. Then he followed that up with a heartfelt apology to Taylor Swift who he interrupted during her award acceptance speech at the VMA awards last year.

It seems it was brought on by the release of his latest Good Friday track. (Kanye has decided to release a free song every friday to show appreciation to his fans.) After the song was released, Kanye tweted future prospects for Good Friday tracks and then expressed his love for Twitter, saying,

“Man I love Twitter… I’ve always been at the mercy of the press but no more… The media tried to demonize me”.

Then Kanye continued to lambaste the press saying how the press were turning him into a monster.

Then he talked about his “George Bush doesn’t care about black people comment” and how he paid for it, saying,

“With the help of strong will, a lack of impathy [empathy], a lil alcohol and extremely distasteful & bad timing … I became George Bush over night”

Then he talked about how he was seen as a racist and you do feel quite sorry for the fella. When he says that many articles start with two paragraphs about how much of an asshole he is, you get a taste of how it must feel to be in his position.

I think he is a great performer and a generally decent person, but he has made some incredibly stupid decisions. The Good Friday Track idea is NOT one of those stupid decisions and I think it shows commendable dedication to fans.

If you thought that was the end of Kanye’s philosophical ramblings, you’ve got another thing coming! He continued to talk about people that hated him. Then he surprised us all with,

“I wrote a song for Taylor Swift that’s so beautiful and I want her to have it. If she won’t take it then I’ll perform it for her”!

Wow! I don’t think any of us were expecting that! But that wasn’t the end:

“She deserves the apology more than anyone. Thank you Biz Stone and Evan Williams [Twitter’s co-founders] for creating a platform where we can communicate directly. She had nothing to do with my issues with award shows. She had no idea what hit her. She’s just a lil girl with dreams like the rest of us. We’re both artists and the media and managers are trying to get between us. Everyone wants to capitalize off this is some way. I’m ready to get out of my own way. The ego is overdone… it’s like hoodies.”

Then it gets even deeper when he compares himself to Elphaba from the play Wicked who was misunderstood as an evil witch.

“Who’s seen the play Wicked? I’ve seen it 4 times! Other than loving the music acting and costumes… it’s my story!!! The Wicked witch of the west basically is so convicted to tell her’ truth when she does it she is outcasted by society and turned WICKED”

He doesn’t stop there.

“With new found humility … who am I to run on stage? I would never ever again in a million years do that. Sorry to let you down. It is distasteful to cut people off as a general rule. What’s the point of dressing tastefully if I’m going to act the complete opposite? Yes I was that guy. A 32 year old child. When I woke up from the crazy nightmare I looked in the mirror and said GROW UP KANYE … I take the responsibility for my actions. I am not a bad person. Even in that moment I was only trying to do good but people don’t always need my help. Beyonce didn’t need that. MTV didn’t need that and Taylor and her family friends and fans definitely didn’t want or need that. These aren’t regular tweets… this is stream of consciousness … I want you guys to know and feel where my head is at…”

It seems like Mr West is truly sorry for last year’s incident. He goes on…

Kanye thinks (and I agree) that the Taylor incident was turned by the media into a “Black man vs. innocent white girl” issue

“I wish I could talk to every hater face to face and change there a opinion of me one conversation at a time. I wish they all knew how much I really cared about music and pop culture and art and peoples feelings. I wish they could accept that I’ve grown and only want to do good for the world. I want to help as many people as I can. I want to help starting with the music and ending with the smile. I want to win there hearts back so I can continue to bring my take on culture to the masses with a clean opinion. It starts with this…”

And that was it… the end of Kanye’s philosophical musings. Deep stuff, straight from the heart of Atlanta’s very own Wicked Witch of the West. 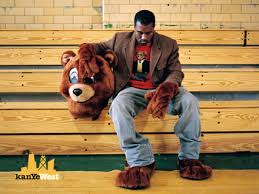 P.S. I ended this article on an emotional note and I don’t want to take away from it but I saw this really hilarious picture which I’d like to share so you can view it here